The Penis Envy mushroom is a type of mushroom containing psilocybin, a naturally occurring hallucinogen that produces a “trip.”

According to experts, This  mushrooms win the title as one of the most potent Psilocybin Cubensis (a species of psychedelic mushroom).

This phallic fungus packs a big punch “internally” as it is tremendously dense.

Despite its overall small size compared to other Psilocybe Cubensis variants, experts consider it to be much heavier in weight. In addition to its physical appearance, the strain has blue bruising which indicates a high psilocin content.

“It is actually psilocin, not psilocybin, that is able to bind with the 5-HT2A receptor in the human brain and cause these [euphoric] effects,” the publication adds.

What are the Effects?

Those who have consumed the penis envy have noted that its effects have a deeper intensity than others. For example, this shroom provides more of a “wavy” visual hallucination than other varieties.

Though the duration of the effects does not change, ingesting the Penis Envy causes the effects to arrive much “sooner” and  much ”heavier,” reports DoubleBlind. 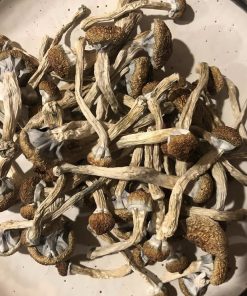